Born in Holland, Jeanne (pronounce it like the French do) lived in The Netherlands and Northern Africa, before immigrating to Vancouver, Canada in 1999. Since that time she has been busy establishing herself as a talented mixed media artist with European flair on the West Coast. Jeanne is an artist full of energy and passion. Painting has always been part of Jeanne's daily life. She has formal training in the European art tradition and extensive exhibit experience both in Europe and North America. After finishing art training in The Netherlands and France, she started painting in themes, working with acrylics, water colour, oil paint, encaustic techniques, printmaking and collage. Working in themes, in series of paintings, allows her to explore a theme or concept. This way the process of painting is for her a journey, a voyage through ideas, composition, texture and colour. Always trying to get as close as she can to the story she wants to share.

Stylistically many of her works hover somewhere between representational and abstract. With a strong sense of colour Jeanne creates paintings, tactile compositions, that are peaceful yet full of movement, subtle yet powerful. The works in her series are all painted on a built surface of different textural materials such as acrylics, plaster, altered images, graphite, inks, wax and oil paint, sometimes adding rust and patinas for extra depth.

Jeanne's most recent series of abstracts is based on the theme 'Lively Lessons'. The paintings of this series follow the chapters and pages of the book 'The Little Prince' by Antoine De Saint Exupéry. "This book has for years been my most favourite little gem. Reading and re-reading it I bump into themes and such rich thoughts, that I want to give it shape through colour and design." says the artist.

A selection of this series can be found in the gallery on this website titled Lively Lessons.
A large part of Jeanne's work has been sold at exhibitions, but individuals and corporations have also commissioned her. Over the years, many of Jeanne's paintings have found a home in Europe, North America, Australia, South Africa, Japan and China.

My Exhibitions Page provides an overview of my exhibitions.

Jeanne enjoys to receive your comments on her art or web site. Please send her an e-mail.

Jeanne is a member of CARFAC

Inspired by nature, traveling and people

Colourful .... a wide range of subjects

Somewhere between representational and abstract

Exhibited throughout the world 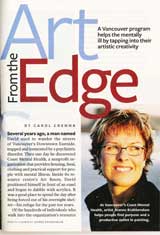 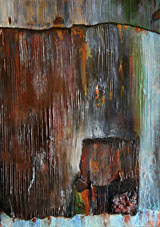 How shall we say the poem started?  The collaboration as layered in its process as the painting that inspired it: from the outermost pigment we soak in and touch, down through spackle and canvas, to muse.

» more -- what alley found in poem